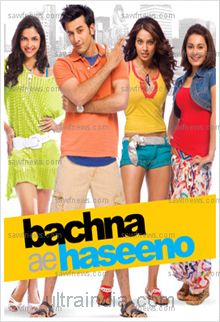 The film follows the journey of a young man named Raj Sharma (Ranbir Kapoor) who meets three young women at different stages of his life: Mahi (Minissha Lamba), a small-town girl from Punjab; Radhika (Bipasha Basu), a model in Mumbai; and Gayatri (Deepika Padukone), a non-resident Indian student in Australia. Its the story of a man who goes from one love affair to another, only to run into true love. In 1996, Raj runs into Mahi on Eurorail, during a Europe trip. Mahi is a dreamy girl who believes in true love and is sure she will meet her Raj (the lead character from the film Dilwale Dulhania Le Jayenge, released in 1995), who will sweep her off her feet. Mahi misses her train after getting off at a station in Switzerland. Raj, a passenger on the same train, sees this and gets off the train to woo her. He pretends he has missed the train, too, consoles her and offers to help her reach the airport in time for her return flight. On the way, Mahi falls in love with Raj. They share a kiss after Raj reads her a poem he has written about his feelings for her. Raj gets Mahi to the airport where she meets her family and friends again. Mahi tells her friends what happened between Raj and her. When she opens the piece of paper on which Raj had written the poem, she finds it blank. She goes in search of Raj, overhears him boasting to his friends about the stuff the pair did, and is shocked and heartbroken on hearing his lies. Raj realizes she overheard the conversation and goes away shamefacedly, leaving the crying and heartbroken Mahi behind. It is 2002. Raj has moved to Mumbai and found a job with Microsoft as a game designer. He is in a live-in relationship with Radhika, an aspiring model. Raj narrates how he met Radhika, who was his neighbor and with whom he shared a mutual attraction. Raj gets an offer to move to Sydney for a Halo 3 game launch. He expects to be able to leave Radhika and move on to a new life, assuming that she is a modern girl who would be able to handle a break-up. However, Radhika unexpectedly announces that she intends to sacrifice her career as a model to marry Raj and join him in Australia. After failing on several occasions to have Radhika dump him, he boards a flight to Sydney on the day he is to marry Radhika. Radhika learns this while waiting for him at the registrar's office, heartbroken. It's 2007. Raj now has a successful career in Sydney. One day, he meets Gayatri, an intelligent, independent girl who drives a taxi at night and studies at a business school during the day. She also works part-time in a supermarket. Raj befriends her and learns that, like him, she does not believe in marriage. However, he realizes that he is falling in love with her and proposes. Gayatri turns him down, saying that she is happy with her life as it is. Rejection cuts him deep. As he stands alone watching his true love walk away, he remembers when he broke the hearts of Mahi and Radhika, realizing how they must have felt. He returns to India to apologize to them. On his return in 2008, he first seeks out Mahi, who is now married and has two sons. He runs into her husband Joginder (Kunal Kapoor), who expresses his anger at first, as he had heard about Raj from Mahi's sister and how Mahi had been hurt. He explains that, while Mahi is the perfect housewife and perfect mother of his perfect children, she is scared of love and romance. Raj apologizes to Mahi and makes her realize how much her husband loves her and that her husband is the Raj she has been waiting for. Mahi forgives Raj and expresses her love for Joginder. Raj then searches for Radhika. When he finds her, he sees that she has changed her name to Shreya and has become a highly successful supermodel. After much effort, he manages to meet her and apologizes. Shreya refuses to accept his apologies and tells him that if he really wants her forgiveness, he will have to work hard for it. To do this, she offers him the job of her personal assistant. Once Raj starts his job, Shreya makes him do all sorts of tasks, from cleaning to serving at parties to holding tons of shopping bags. She tries to humiliate him on every occasion, but Raj remains firm in his resolve and continues to serve without complaint. She finally gives up and tells him how hurt she felt, sitting alone outside on the day that was supposed to be their wedding. She refuses to accept his apologies and tells Raj to give up and return home. While Raj is waiting for his flight to Sydney, Shreya arrives and tells him how she has realized that the root of her frustration was the bottled-up hate against Raj. She thanks him and forgives him. Content, Raj returns to Australia, having completed what he had set out to do. On his return, Raj finds a pile of letters from Gayatri, written over the six months Raj was gone. While he has been away, Gayatri has had second thoughts and regretted turning down Raj. He seeks her out and reunites with her. They declare their love for each other and share a kiss, living happily ever after.