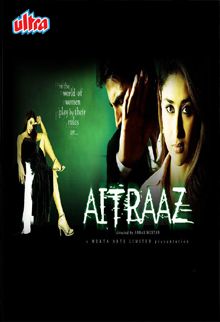 Aitraaz is a film about Sonia Roy (Priyanka Chopra), Raj Malhotra (Akshay Kumar) and Priya Malhotra (Kareena Kapoor). Raj and Sonia were in a previous relationship together but her ambitions caused their relationship to dissolve. Raj is now married to Priya and is expecting his first child. Raj is expecting a promotion as Chief Executive Officer in his cell-phone manufacturing organization owned by the chairman, Ranjit Roy (Amrish Puri). At a company meeting he meets Sonia and it is revealed to everyone that she is married to Ranjit Roy. She also happens to be the managing director of the company. She does not offer Raj the post he wants but instead makes him the director. Sonia constantly flirts with Raj and the situation gets even worse when she flirts with him in front of Priya. Sonia makes a move on Raj when she tells him to come to her house, to discuss a phone malfunction.Then she tries to rape Raj. Raj rejects the request for sexual favours and she accuses him of attempted rape. He takes on the company in court as his wife battles it out for him, after learning from a tape that he is innocent. The tape was left when Sonia tried to rape Raj, he was calling, because of the phones defect it goes to one of his friends answering machine. After learning about this the lawyer immediately starts his case from this, but is run over by a hitman. That is why his wife battled it out for him. In the end Raj wins and after complete humilitaion and after getting a divorce from her husband Sonia commits suicide.