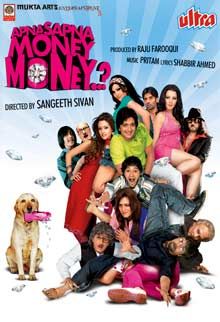 The story is a cop and robber chase, the robber here transporting diamonds worth 50 crores. Bamboozling their way into the already rickety story-line are a bunch of buffoons - one small-time conman Kishan Rietesh, one honest mechanic Arjun Talpade and his true love Shivani Riya Sen and her dad Kher, one wannabe singer Julie Koena Mitra, and an assorted cast of village folk, all with hearts of shining gold. There is also, in case you are losing hope, a dog, with admirable fetching capabilities. So, there's Jackie Shroff as Carlos, a bankrupt and extremely inept mafia don. His associate Sania Jaitley is transporting smuggled diamonds via train, but pursued by Inspector Namane Shetty and in a crunch, places them in an old man's bag. The old man is actually trickster Kishan in disguise, who carries the diamonds away unwittingly. Later when a couple of gangs get a whiff of the wealth, there ensues a grand mela of sorts with everyone vying for the loot.