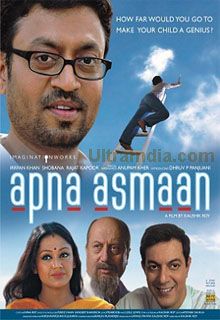 The film begins with Ravi (Khan) and Padmini (Shobhana) are living as happily married couple and they have a baby boy named Buddhi Raj (Dhruv Piyush Panjnani),who has a mental disorder.Padmini blames Ravi for this because he had dropped him when Buddhi was small.Buddhi is good at drawing but his mother wants him to be good at mathematics, as she was himself a gold medalist during his academic days.Felling hopeless,she started takes him to temples, churches and priests frequently,hoping for a miracle.During that,Ravi met with Dr Satya(Anupam Kher), who was a researcher in that matters and recently discovered a brain booster drug. So, Ravi took Buddhi to the doctor to bring some hope.Buddhi started taking the brain booster drug and as time elapses,Buddhi's brain improved and he becomes a very good mathematician there after.As the time goes on,drug started showing his side-effects too as despite enhacing brain activity of buddhia.Finally,Buddhia forget his own parents during the process that creates a fresh trouble for them.