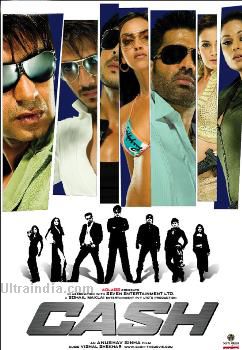 The film opens with Danny (Zayed Khan) boarding an plane. Seeing that him and another girl are the only passengers, he joins her. She is Preeti (Ayesha Takia). With nothing left to do, Danny tells her an story. The story is about 3 con-men, Karan (Ajay Devgn), Dhananjay (also Zayed Khan) and Lucky (Ritesh Deshmukh). Karan is an secret thief who hides his dirty work from his girlfriend Shania (Shamita Shetty), who is actually an undercover spy. The three con-men make a plan along with Lucky's friend Pooja (Esha Deol) to find and steal a heist of missing diamonds. But they do not know that Shania has also set her eyes on the diamond. While they are all on the run to find the diamonds, lovers Angad (Sunil Shetty) and Aditi (Dia Mirza) find the diamonds, and hide them in a secure place. Aditi, however, not knowing that Angad has planned to steal the diamond himself. At a local casino, Lucky runs into Aditi, and accidentally the two swap their car keys. Upon returning, Lucky realizes he has Aditi's car, and soon finds out, that the missing diamonds are hidden inside. Aditi arrives back at her home to find Angad cheating on her. Taking advantage of the moment, Angad kills Aditi and runs to her car to steal the diamonds, only to find them missing. By this time, Karan, Dhananjay and Lucky have fled with them, but are soon caught up by Angad and his gang. After surviving an big brawl with the crew, the three finally surround Angad, and shoot him multiple times, leading to his death. Finishing off the story, the three inherit the diamonds & wealth. Karan marries Shania and Lucky marries Pooja. It is then revealed that this story was about Danny's life itself, and he is Dhananjay.