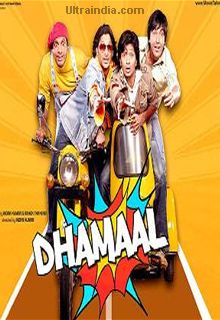 Dhamaal is about four friends; Boman Contractor (Aashish Chaudhary), who lives a wealthy lifestyle with his eccentric dad, Nari (Asrani), who loves his antique car more than his son, and asks his son to leave when he damages the car; dim-witted Manav (Jaaved Jaffrey) and his elder brother Adi (Arshad Warsi); and Roy (Ritesh Deshmukh), a trickster who wears a magnetized belt. All four are afflicted by the get-rich-quick virus. Their fortunes take a turn after they accidentally bump into an underworld don (Prem Chopra) whilst he is about to die, who tells them about a hidden treasure in Goa including 10 crore rupees. The group race towards Goa in Nari's stolen car, little knowing that their plans will soon be foiled, albeit hilariously, by Police Inspector Kabir Nayak (Sanjay Dutt), who needs the money at any cost.