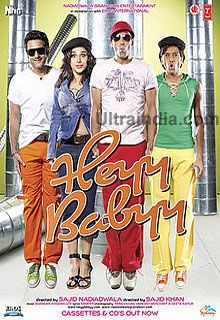 The guys find it very difficult to live without Angel. Arush ends up challenging Isha to marry someone faithful within seven days who will accept Angel: If she's unsuccessful, she will have to give Angel back to him. They sign a contract to make the deal final. The men worry that they might lose the bet since Isha is very beautiful and wealthy. Arush makes a plan to win Isha and Angel back with the help of Ali, Tanmay and Isha's father. His attempts fail and Isha decides not to marry him. On the same day, Tanmay/Eddy Teddy meets her at the fair. After seeing his affection towards kids, Isha decides he will be good for Angel and her. A few days later, Isha finds out the truth and plans to fly with Angel on her private jet, since she was fooled and has lost the deal. Tanmay and Ali take the contract with them, as well as phoning the police. Just as the police are about to take Angel away from Isha, Arush tears up the contract and allows Isha and Angel to go. While they are parting, Angel says her first word: Dada. Arush, Tanmay and Ali are upset until their bell rings the next day. They are amazed to find Angel at their doorstep. A few moments later, Isha turns up, telling Arush that it was very hard for them both to forget him. She agrees to marry him and the three are reunited.