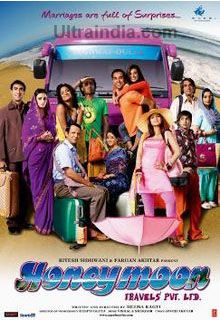 Arush Mehra (Akshay Kumar) lives a fairly wealthy lifestyle in Sydney, Australia with roommates Tanmay Joglekar (Ritesh Deshmukh) and Ali Haider (Fardeen Khan). He works for a popular dance club, while Tanmay entertains children as 'Eddy Teddy' and Ali takes care of their apartment. All three are womanizers and usually end up sleeping with different women. One day, they find a baby girl outside their door with a note instructing them to take care of her, since she is the daughter of one of them. The three men go to all the women they dated and slept with, but none claim that this baby is hers. The men try to take care of Angel, but she becomes a huge pain, so they drop her off at a church. A big rainstorm occurs, and the baby develops an illness after being caught in the rain. The three men stay with Angel in the hospital, realizing how much they love her. She recovers, and the guys become changed men. They love her, pamper her, and grow a huge attachment towards her. One day, a woman named Isha (Vidya Balan) comes to take Angel back, claiming the baby to be her daughter. The guys are shocked as Arush tells them about his past. One year ago, Arush traveled to Delhi to attend his cousin Arjun's wedding. There, he met Isha Sahni, who also resides in Australia. He won her over and they spent night with each other. Shortly after, Isha caught him in a compromising situation with Devika Sharma (Sindhura Gadde), Isha's friend, so the couple split up. Arush returned to Sydney and forgot about the incident. The story is about six couples, who are on their honeymoon with the Honeymoon Travels Pvt. Ltd. bus and their trials and tribulations during the four-day journey to Goa. The couples are: Oscar Fernandez (Boman Irani) and his wife Naheed (Shabana Azmi) who have just recently married. They are middle age and the target of constant mocking from everyone else. However, they intend on having a great journey and not be bothered by their difficult pasts. This is their second marriage. Oscar's first wife committed suicide and Naheed's husband and two children died in a car accident. Oscar is Naheed's first husband's business partner. After a chance meeting with Oscar's estranged daughter in Goa, father and daughter mend their relationship. Partho Sen (Kay Kay Menon) and Milly Sen (Raima Sen), a couple from a small town in Bengal. He is a serious man and she behaves as a traditional sari-wearing wife. Through an encounter with a bunch of thugs, Partho finds out his timid housewife holds a black belt in martial arts, as she defeats the crooks without breaking a sweat. Pinky (Ameesha Patel) and Vicky (Karan Khanna), hailing from Delhi. They couldn't be more different, as Pinky is very extroverted and Vicky is the opposite. When Vicky sees Bunty for the first time, he develops romantic feelings for him but isn't able to express them. Madhu (Sandhya Mridul) and Bunty (Vikram Chatwal) have most recently married. Their differences draw from the fact that he is an NRI (non-resident Indian), while she has lived in Mumbai, India, for her entire life. Bunty is a closet homosexual and his parents want him to marry the daughter of a family friend. Out of anxiety he contacted Madhu over the net and came to India and married quickly. Madhu had a recently failed relationship with a man, whom she left after discovering that he had a wife and child already. She found Bunty and married quickly to forget that pain. Hitesh (Ranvir Shorey) and Shilpa (Dia Mirza) are from Gujarat and wonder if love or marriage is more important. During the first half hour, Shilpa runs away with her love, Jignesh (Arjun Rampal). Shilpa and her love board the Honeymoon Travels bus returning to Mumbai, while escaping from contract killers sent by Hitesh's father. Aspi (Abhay Deol) and Zara (Minissha Lamba) are seemingly the most perfect couple of them all: They've never fought. Unknown to each other, each of them is a superhero and have to go off at moment's notice to help the public. When Zara questions the whereabouts of her husband when he is not to be found some nights, they fight for the first time. In course of the confrontation, the truth about their superhero identities is revealed to each other. As the bus continues its journey, it is followed by a mysterious biker, dressed in black clothes, wearing a helmet — someone who still has business with one of the passengers.