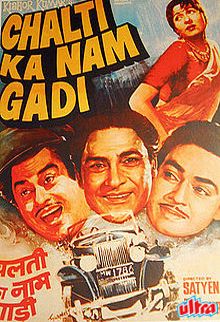 Brijmohan Sharma (Ashok Kumar), Manmohan Sharma (Kishore Kumar), and his brother Jagmohan Sharma (Anoop Kumar) run a garage. The eldest brother Brijmohan hates women and doesn't allow any women or pictures of them in his garage unless its an emergency. One day, while Manmohan is on the night shift, Renu (Madhubala) comes to the garage seeking help as her car breaks down. Renu gets angry at Manmohan because he is sleeping when he is supposed to be on duty. Manmohan doesn't like the fact that Renu shouted at him and initially refuses to repair her car, but finally agrees. Manmohan fixs the car, and Renu leaves, forgetting to pay Manmohan for his services. He tells his brother Brijmohan about this and realises that Renu forgot her purse in the garage. Manmohan goes through it and finds a pass to a concert. Manmohan goes to this concert to recover his money. When Manmohan reaches the venue, he is not allowed to enter as the pass has Renu's name on it. Not wanting to let go of his money, Manmohan waits in Renu's car and to meet her when she comes out. He, however, falls asleep and Renu doesn't notice him; she drives home and parks in her garage with Manmohan in the car. When Manmohan wakes up, he gets hungry and looks for some food in Renu's garage. A servant in the house sees this and chases Manmohan, who manages to escape. On his way home, he notices a few men dumping a dead body on the road and fleeing. When he tells his brothers about his night the next morning, they have a hearty laugh at his expense. Later, Renu calls the garage asking for help with her car and assuring she will pay back her fees. Manmoham refuses to go to her house, fearing that he will be recognised by Renu's servant and will get into trouble; Jagmohan decides to go. Jagmohan meets Sheela (Sahira) in Renu's house and the two start talking. Jagmohan is, however, afraid of women. He gets nervous because Sheela is around and can't repair the car. After Jagmohan takes off (not before drinking 10 glasses of water due to anxiety), Renu decides to call Manmohan. Meanwhile, Renu's father is approached by Raja Hardayal Singh (K. N. Singh), who wants to get his younger brother (Sajjan) married to Renu. Renu's father decides to talk to Renu about this, not knowing that Raja Hardayal and his brother are crooks – Manmohan saw Raja Hardayal's brother dump a body. As Renu is falling for Manmohan and the crooks desperately want her inheritance, Renu and Manmohan are captured by Hardayal's men. In captivity, they meet Kamini, whose photo Renu had found in Brijmohan's room. Brijmohan and Kamini were in love, but she was married off to Raja Hardayal. Brijmohan is under the impression that she dumped him for a richer man; as a result, he decides that he never wants to associate with women again. Kamini tries to free Renu and Manmohan, but a guard enters. Kamini, however, is able to escape and goes looking for Brijmohan. Meanwhile, Raja Hardyal Singh captures Renu's father and forces him to get Renu married to his brother, threatening to kill Manmohan if he doesn't. Before Raja Hardyal Singh has his way, Brijmohan is brought to the scene by Kamini. Brijmohan, who is a boxing champion, fights Raja Hardyal Singh's men with the help of his two brothers. In the end, Brijmohan and his brothers are victorious. Manmohan decides to marry Renu, Brijmohan decides to marry Kamini, and Jagmohan decides to marry Sheela.