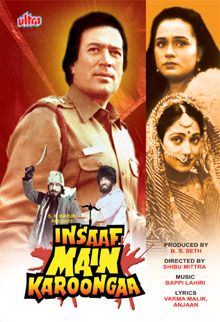 INSAAF MAIN KAROONGA is one man’s quest for justice in his own familiar way and ground. Captain Rajesh, is taken aback when his young, beautiful and loving wife committed suicide. He traces the reason of the suicide and comes up with a truth that his wife was raped, this drives him to seek for vendetta. He traces the culprit and shoots him point blank and then surrenders to the military police. However when he hears news about the culprit’s survival and recuperation over the radio, he is re-provoked. He escapes from the military police and reaches the hospital where the culprit is recovering. The military police also reached the hospital foiling his plans. A volley of firing at the hospital followed by a mille ended up in the captain taking a young girl as a hostage for his escape back in the woods, only to discover later that the hostage is known other than the daughter of the culprit. Suddenly an idea flashed like a lightening in his mind, “Capture this girl and make her hostage to torture the culprit and drive him to surrender before the court of law and accept the heinous act of rape.” And captain just did that. He captured Pinky and kidnapped her away, far away on the heights of snow-clad mountains of Kashmir and started his mission. And with this starts a most intriguing, thrilling, exciting and tense drama.