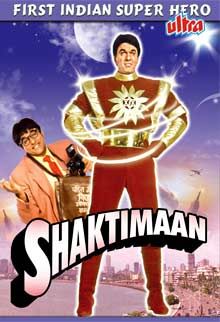 Shaktimaan is a fictional Indian superhero. Around 450 episodes of the series originally aired on Doordarshan, India's national television network, from 27 September 1997 (barring the introductory episode on 27 September 1997) to 27 March 2005, on Sundays at 12 noon IST. The telecast slot, however was shifted to 9:30 a.m. for the last episodes. It has also aired on Pogo in English, Tarang in Oriya and Chutti TV in Tamil, and repeated its Hindi telecast on STAR Utsav. Shaktimaan, the main protagonist and his alter ego Pandit Gangadhar Vidyadhar Mayadhar Omkarnath Shastri, a photographer for the newspaper Aaj Ki Aawaz. Shaktimaan is depicted as a human who has attained superhuman strength and power through deep meditation and attaining control over five elements of life. Kitu Gidwani, and later Vaishnavi Mahant, and later Shruti Shetty plays the role of Geeta Vishwas, a reporter in the series who loves Shaktimaan. Surendra Pal plays the role of Tamraj Kilvish, the main antagonist in the series.