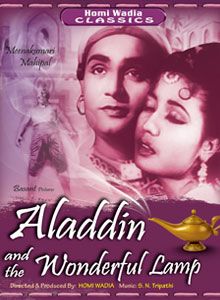 Aladdin And The Wonderful Lamp

The Light Vampire tells him that he needs the magic lamp and that there are three conditions for acquiring it. The honest person in question is, of course, Aladdin (Mahipal) who lives in a kingdom where the Sultan has forbidden all male citizens from leaving home so that the Princess (Meena Kumari) may pass through the city unseen. Aladdin is indignant at this treatment and determined to flout the law. He makes a bet with one of his gambling companions. When her entourage arrives and all the men flee, Aladdin hides behind some jars to catch a glimpse of her. He trips one of the men staggering under the weight of her palanquin, causing him to fall and drop it, and she tumbles out. She and Aladdin lock gazes and are instantly smitten. They are awfully pretty people:He looks kind of like Laurence Olivier sometimes (although he wears so much makeup in the film that he sometimes looks like a girl too). I’ve heard about Mahipal but had never seen him before this movie. Anyway, Aladdin tells everyone that he didn’t see the Princess, losing his bet. But one day a courtier almost rides over Aladdin, and then has him arrested for “insulting” his horse! He is Nasimbeg, the son of the Chief Minister, Massoodbeg. Unbeknownst to the Princess and most of the court, the unscrupulous Chief Minister Massoodbeg has replaced her father with a look-alike. The real Sultan is imprisoned in a dungeon in the palace while the fake one does the Chief Minister’s bidding, to everyone’s puzzlement and dismay. Massoodbeg wants to marry his son to the Princess and her real father has stubbornly refused.