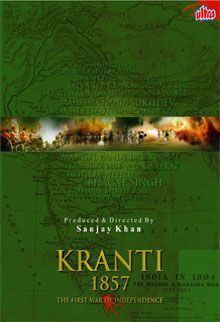 The serial KRANTI starts with the massacre of the Red Fort and the conflict of the East India Company and the people of India for freedom. The epic presentation of 52 episodes of 1857 Kranti depicts the characters like Bajirao Peshwa, Nanasaheb Peshwa, Azimulla Khan, Tatya Tope, Hazrat Mahal, Wazid Ali Shah, Rani Laxmibai, Azizan and many other historical figures who fought personally for the freedom of our country and broke the laws of the British Empire and made them aware that they might have won this war but this is not the end the Indian shall revolt and gain Independence.