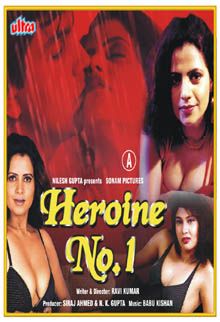 HEROINE NO. 1 is a turbulent story of a girl who set out in the glamour world of the films and ended committing suicide. It is the story of a sister, who went on a spree of killing when her sibling was hurt and killed. Shalu and Dolly are the young and extremely beautiful daughters of Mathur. Young Dolly nursed the notion of join the world of glamour as an actress and becoming a heroine in films. To achieve her goal she met a film director Vijay Khanna. Khanna offered her a chance in his film as a leading actress, heroine of the film. During one of her shooting, his three friends Khurana, Thakur & Chokhani who were also the financiers, arrived on the sets and saw the young and beautiful dolly. Overcome with lust, they picked Dolly from the studio over some pretext and took her to their bungalow where they raped her. Hurt with the attack on her modesty, Dolly commited suicide, but not before she had narrated about the incident to her only confident, her sister Shalu. Mathur on hearing about the fate of his daughter Dolly died of shock. Shalu who is left alone vows to take revenge. She quits her ambition to become an IAS officer and enters Showbiz. She meets director Khanna who offers her a role in his film, just as he had done for Dolly. She works with super star Rahul Kapoor and the two become fast friends and eventually fall in love. How did finally Shalu take revenge? What was her plan? See the twist and turns the life of Shalu took after that in HEROINE NO.1