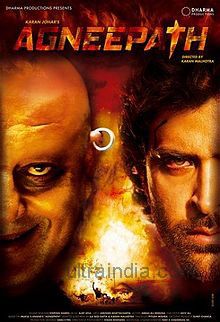 Agneepath (English: Path of Fire) is a 2012 Indian action drama film produced by Hiroo Yash Johar and Karan Johar under the banner of Dharma Productions. It is a retelling of the 1990 film of the same name and was directed by Johar's former assistant Karan Malhotra. The screenplay was written by Malhotra along with Ila Dutta Bedi. Johar pays tribute to his father, Yash Johar, the producer of the original, through the film. The music of the film was composed by Ajay-Atul, with lyrics written by Amitabh Bhattacharya. Though publicized as a remake, the film borrows only the basic plot of the original, while making the characters and incidents completely different. The film's title was taken from a poem of the same name by Harivansh Rai Bachchan, which forms a thematic link through the film, both literally and metaphorically.