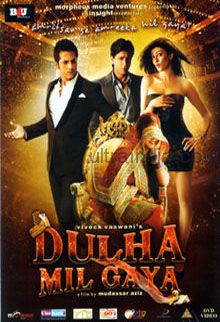 Dulha Mil Gaya , English: Found a Groom is a 2010 Bollywood romance film directed by Mudassar Aziz. It stars Sushmita Sen, Ishita Sharma and Fardeen Khan in the lead roles whilst Shahrukh Khan makes an extended appearance. The film was released on January 8 2010, and was one of the first Bollywood releases of 2010 (the other being Pyaar Impossible, which released on the same day). Dulha Mil Gaya was panned by critics, and is considered one of the worst box office flops in India for the past few years, however, the film did manage to do well at the box office collections for Overseas Markets.