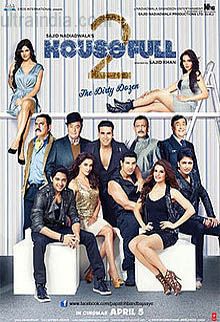 Housefull 2 is a 2012 Indian comedy film directed by Sajid Khan and produced by Sajid Nadiadwala. It is the sequel to the 2010 film, Housefull and stars Akshay Kumar, Asin Thottumkal, John Abraham, Jacqueline Fernandez, in the lead roles, whilst Ritesh Deshmukh, Zarine Khan, Shreyas Talpade, Shazahn Padamsee, Randhir Kapoor, Rishi Kapoor, Mithun Chakraborty and Boman Irani play supporting roles. The music is composed by Sajid-Wajid. The film is said to be inspired from the 2003 Tamil film Banda Paramasivam directed by T.P. Gajendran and starring Prabhu Ganesan and Kalabhavan Mani in lead characters which in turn is a remake of 1998 Malayalam film Mattupetti Machan starring Mukesh in the lead. Upon release the film received mixed reviews, however, the response was more positive than its predecessor and it opened very well at the box office and was declared a Super Hit at the Box Office.