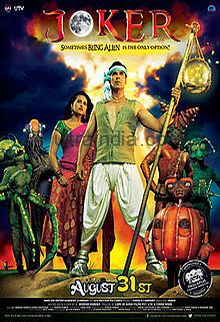 Joker is an 2012 Hindi fantasy film directed by Shirish Kunder, and also his second directorial venture after Jaan-E-Mann. The film stars Akshay Kumar opposite Sonakshi Sinha in lead roles. This will be the second film in which Sinha is paired opposite Kumar after Rowdy Rathore. The film released worldwide on August 31, 2012. Joker was reportedly promoted as Akshay Kumar's 100th film, but later Akshay clarified that the 100th film landmark had been crossed long before he even signed up for Joker. “It was a miscalculation on Shirish’s part. OMG is my 116th film,”he said. The trailer of the film revealed on 11 July 2012, and also in cinemas along with Cocktail. Chitrangada Singh has performed an item number in the film on the song titled Kafirana. Upon its release, the movie crashed badly and was declared as a disaster by Box Office India.