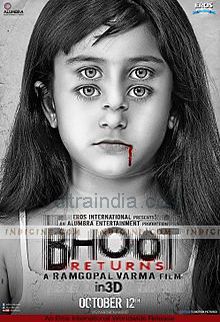 Bhoot Returns is a 2012 Bollywood 3D horror film directed by Ram Gopal Varma and written by Ravi Shankar. The film was released on 12 October 2012, with mixed to negative reviews. The film stars Manisha Koirala, J. D. Chakravarthy, Madhu Shalini and Alayana Sharma in the lead role. It is a sequel to the 2003 film Bhoot, also directed by Varma. A further sequel, Bhoot 3 is in production.