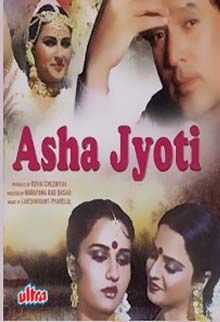 Asha Jyoti was an emotional romantic film. Ramesh Chander is a businessman whose son is a veena player and keeps asking his son Deepak whether he would marry his childhood friend Asha. Deepak keeps declining this idea and says to his father that he is not attracted to Asha and that he regards her as a friend only. Deepak Chander is a musician who falls in love with one of his fans named Jyoti, daughter of a widowed poor father, when he goes on to perform in Kashmir. Jyoti is a good dancer and Deepak informs his parents by way of telegram that he has chosen a girl of his choice and would like to marry her. Deepak promises father of Jyoti that, he would pay off the debts owed by Jyoti's father within a weeks time and then marry with Jyoti with his father's permission.But when Deepak reaches his home in Bombay, he finds that his own Dad, Ramesh, has committed suicide due to bankruptcy and receives a letter drafted by his dad, before his death saying that his father Ramesh had two wives and that this was kept as a secret even to his mother.In the letter Ramesh also expresses his last wish that his second wife and her girl child be taken care off and that the secret of him having had two wives be not told to Mrs. Ramesh Chander.Due to these incidents, Deepak gets stuck up in Bombay and is unable to return to Kashmir on time i.e. within a week as he had promised to Jyoti's dad. Meanwhile in Kashmir, the creditor of Jyoti goes and asks for money to Jyoti's dad and Jyoti expresses her inability to pay back money now as Deepak has not arrived at.On this the creditor gives a warning to Jyoti's dad that when Deepak arrives, he has to say that Jyoti was married off to the creditor as Deepak did not come on time and if he does not say this, then Jyoti would be killed. Fearing the creditor, when Deepak does arrive at the house of Jyoti in Kashmir,Jyoti's dad lies to Deepak that he has married off his daughter to the creditor. Deepak is heartbroken and returns home. Seth Badri Prasad, a rich man was the childhood friend of Ramsh Chander and he so as to bail out Deepak from bankruptcy problem, requests all the creditors of Ramesh, with whom Ramesh had pledged the bungalow to get loans from, to not to file suit against Deepak and that they should auction the bunglow and he would by himself buy the bungalow. When Deepak comes to know of this, he feels indebted to Seth Badri Prasad. Since the time Deepak entered his adulthood, Badri Prasad had been forcing his friend Ramesh Chander to ask Deepak to marry Asha (daughter of Badri Prasad). After Deepak returns to Bombay, his mother suggests him that he should now get settled in his life and bring some happiness in his life and for that he needs to marry Asha. After much hesitation, Deepak marries Asha, his childhood friend and daughter of Badri Prasad. During the marriage function, Deepak observes that among the audience, there is woman who looks similar to Jyoti. Deepak then, on his wedding night itself, goes and searches for the Jyoti lookalike in many hotels and lodges and at last finds that the woman was none other than Jyoti herself. Now Deepak comes to know that Jyoti was not married to Hukumchand and that her father had lied to him. Jyoti then taking help of Mauji had come to Bombay in search of Deepak. Jyoti also discloses to Deepak that she now is mother of Deepak's child. On knowing this, Deepak decides to cut off his marriage with Asha and to tell Asha the truth that he is already a father to a child. But Jyoti insists that, this would be a big shock to Asha and that Asha would not be able to remarry again ever as the society might discard her. Jyoti thus asks Deepak to consider as if he had never met her ever and continue to have a good married life with Asha. Thus for welfare of Asha, Jyoti insists that Deepak be a loyal husband of Asha and that she would take care of Deepak's child by herself. Later Jyoti becomes a popular Dance Teacher in her city. Although Deepak marries Asha, when ever he goes near Asha, he gets memories of Jyoti and thus avoids going near her. Thus now Asha decides to learn dancing form Jyoti. As a year goes by Jyoti and Asha become very close friends.