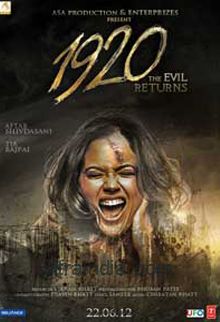 1920: Evil Returns is a Bollywood horror film written by Vikram Bhatt and directed by Bhushan Patel. The film is a quasi-sequel to a 2008 film 1920, and stars Aftab Shivdasani, Tia Bajpai and sagar Saikia in the lead roles. The movie is third in a series of quasi-sequels released under the Bhatt Banner including Raaz – The Mystery Continues, Murder 2, Jism 2, Jannat 2 and Raaz 3D each of which had nothing to do with their respective prequels, but somehow fell in the same genre following a similar story. The trailer was released on September 28, 2012. The film released on November 2, 2012 to mixed reception and fared better at the opening Box Office weekend (12.27 Crore Net.) as compared to any other releases that week except Skyfall. Boxofficeindia declared the film as a semihit after its two week run.