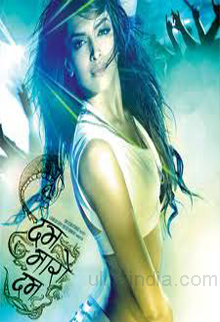 Dum Maaro Dum Movie review Lust, drugs, mafia and to add a little more spice to it we have Deepika Padukone performing a sensual item number,and it’s all there in Rohan Sippy’s long awaited Dum Maaro Dum. The movie is about different lives in Goa. Every one linked with drugs or love. It starts with Tani and Lorry (Pratriek Babbar) getting admission in US universitiesbut lorry does not get a scholarship forcing him to depart from his love for four years.When one is depressed he looks for comfort in liquor but Lorry goes astep forward and ends up relieving his pain with dope and sex. But his hopes return as his friend gives him a choice to do a minor drug transfer in return for $15000 for his admission. Initially confused he decides not to but eventually turns towards it.Everything is set for him to go, but as luck has it he is caught in the airport by ACP Vishnu Kamath (Abhishek Bachchan) The story of Kamath is then shown. Once a corrupted officer of the narcotic department, his life changes when he loses his wife (Vidhya Balan) and son in a car accident. Now he has been appointed to clear all corners of Goa.