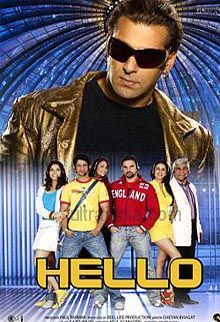 Salman Khan is a Bollywood actor, who is on a live tour nearby Delhi, where his private jet has a crash. Luckily, he survives and in a lounge, he meets Katrina Kaif. She tells him a story, about six friends and their boss who all work together at a Mumbai-based call centre. They are instructed never to reveal their location, and speak with an American accent by a Boston-based company. There is Shyam (Sam) (Sharman Joshi), Priyanka (Gul Panag), Varun (Sohail Khan), Esha (Isha Koppikar), Radhika (Amrita Arora) and Military uncle (Sharat Saxena). Their boss, Subhash Bakshi (Dalip Tahil), attempts to further his career by plagiarizing software, agrees to lay off 40% of the Indian workforce, and re-locate to Boston. One night, at a party, they all get drunk and decide to head back home since it was late. The six are on their way home, until they approach an accident, and are stuck on top of a cliff in their car, and if anybody tries to move, there would be chances that the car will lose its balance and fall off the cliff. They all remain calm, and when one of the friends tries to call someone, he finds his phone battery has run out, therefore, in rage he breaks his phone and throws it on the floor of the car. Later on, still trapped in the car, the broken phone receives a phone call; six surprised friends answer it, only to find the caller is God. God tells the six, they should keep calm, and just believe in themselves and all will be well. They do as they are told, and find that the fire brigade are here to save them. They all get saved. After the story, Khan asks the woman who she is, and she replies if you believe in yourself, you will know the answer. She walks out of the lounge, and as Khan follows her, he seems to witness she has suddenly disappeared. He believes in himself, his jet gets fixed, and he flies back home.