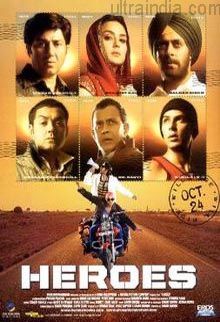 Two film academy students, Ali (Vatsal Sheth) and Sameer (Sohail Khan), must make a movie in order to graduate. They choose to create a documentary illustrating reasons not to join the Indian Armed Forces, and go on a motorcycle road trip bearing three letters they have been given to deliver — each from a slain soldier to his family. On their first stop, in Atari, Amritsar, they meet the widow, Kuljeet Kaur (Preity Zinta), and the son, Jassi, of a Sikh soldier, Balkar Singh (Salman Khan), who was killed in action three years earlier. The students find that the entire village is greatly proud of the heroic officer and his sacrifice for country. The students' second stop, Himachal, finds them meeting the wheelchair-using former Air Force pilot Vikram Shergill (Sunny Deol), whose Army officer brother, Dhananjay Shergill (Bobby Deol), had also been KIA. There they see that Vikram Shergill is very proud of his brother's sacrifice for his country. Finally, back in Leh, the duo meet the parents, Dr. and Mrs. Naqvi, whose son Sahil (Dino Morea) had also died for his country. After bringing Dr. Naqvi's (Mithun Chakraborty) life back to normal, they finally end their filming. After meeting all three families they realized that being a soldier is all about proud love for one's motherland. Years later, Jassi (also played by Salman Khan), now a man and a soldier himself, visits Ali and Sameer at the military academy the two former film students had founded after failing multiple times in army entrance test.