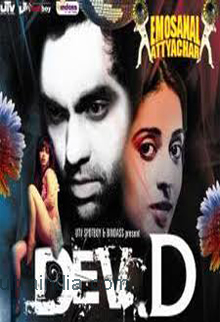 Dev (Abhay Deol) is the son of a rich Punjabi Businessman. He and Paro (Mahi Gill) are childhood sweethearts. But Dev, being an insecure arrogant guy, instead of acknowledging her affection and care, nudges Paro over frivolous things. The movie is based in the contemporary Punjab and Delhi, where familial ties are negotiated by the traditions of patriarchy and marriages are reduced to a game of power and honour. Dev is sent to London for higher studies when his father senses how spoilt his son is. But while separated by distance, Paro and Dev's youthful love only blossoms. Dev arrives to Chandigarh to meet Paro. Their endeavor to make love makes for some dark comic moments. The seeds of suspicion are sown here, that the couple will never be able to weed out for a lifetime. When Dev hears rumours about Paro, he immediately believes them and ditches Paro. What makes them fall apart is mutual suspicion and an essentially male vision of how a woman should conduct herself sexually. Paro turns her back on him when she hears him insult her, and agrees to marry whoever her parents choose. On her wedding day, he realizes that the rumors were false. But his ego doesn't let him accept his mistake, and he lets her marry someone else. Enter Chanda. This part has references to the notorious Delhi school sex MMS scandal. Her father commits suicide as he feels humiliated by his daughter's reputation. She is disowned by her family. The movie portrays how she transforms herself from an innocent traumatized schoolgirl into a prostitute. While Chanda isnâ??t a career prostitute, she is no different as well. Instead of performing Mujras, she enacts scenes from popular American pornographic series. The only thing, that makes her different is the fact that she hasnâ??t given up on her studies for the profession and has also kept the exit gate open. Dev, tormented by Paroâ??s wedding, seeks alcohol and drugs. His escape to Delhi from Chandigarh, is as much a pursuit of his lost love, as much it is an attempt to run away from his father. Months later, Dev calls Paro's husband in the middle of the night, after which Paro visits him. While Paro has grown to accept her fate, her heart still beats for her childhood lover. Her love always transforms into immense care. On the other hand, Dev demands much more than love - exclusivity over her body - and thatâ??s where he runs out of luck. More than separation itâ??s the thought of Paro making love to somebody else thatâ??s the cause of agony for him. Ironically, his life always orbits around women. He is forced to cause self-destruction by one and rescued by another. In the end he realises that he was wrong and that maybe he never really loved Paro. He goes back to Chanda and lives with her thereafter.