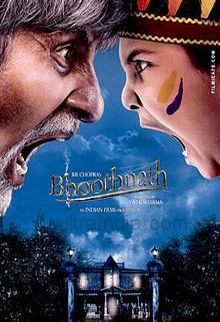 Banku, his mother, Anjali Sharma and father move in to their new house -- the Nath villa, unaware of the fact that the house is inhabited by a ghost. It is learnt the ghost is not too happy with his new housemates. But what the ghost is not prepared for is his unlikely friendship with Banku. Now Banku must uncover the reason why his ghostly friend is stuck and help him to attain salvation. Aditya is an Engineer on a cruise line, and lives a wealthy lifestyle along with his wife, Anjali, and a school-going son, Aman. They decide to re-locate to Goa and rent a bungalow, 'Nath Villa', that was built in 1964. They are made aware that the bungalow is haunted, but they disregard this. While Aditya returns to work, Aman is enrolled in St. Francis High School, and Anjali hires a drunken thief, Anthony, as a helper to clean the house. Shortly thereafter Aman starts getting in trouble in school, and is reprimanded by Principal J.J. Irani. To make matters worse, he also starts making up stories of a new friend 'Bhoothnath'. Anjali disregards this, but during a stage performance, a local resident tells her that Aman is mimicking the former owner of Nath Villa. Anjali will soon find out that indeed the bungalow is haunted by it's former owner - Kailash Nath - who has taken a morbid liking to Aman, and will not permit them to vacate the house under any circumstance.