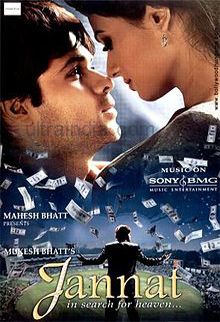 The story revolves around a man who is caught in a quagmire of crime and consumerism as he struggles to find heaven on earth. The story revolves around Arjun, a street-smart young conman with an obsession for making a quick buck. He has a chance meeting with a girl at a mall and falls in love at first site. Zoya was gazing at a ring placed inside showcase protected by glass and hoping to acquire this ring. He breaks the glass to grab the ring she was looking at, that led to catch him by the security guards patrolling in the mall. Zoya (Sonal Chauhan) gives him the reasons he was looking for to move out of his ordinary life and become rich for this girl. He steps up from playing small-time card games to becoming a bookie. Stuck in a triangle of sorts between the woman he loves and his addiction to make a quick buck, Arjun moves on from being a bookie to a runner for the mafia. He steps into the world of Cricket match fixing, ensuring a match looks interesting, but the end result is to their advantage. Arjun basically switches on the limelight to the bigger, faster, better and more, until his dizzying rise attracts the attention of the police. Arjun has now to choose between the love of his life, and this new found success and power. As Arjun struggles to choose between the two, a underworld don (Javed Sheikh) offers the forbidden apple of limitless wealth in exchange for his soul, drawing him into his core entourage of money spinners. When Arjun declines his offer, the don has Arjun drawn into a plot where he is trapped as the man accused of killing a coach. With the police after him, Arjun manages to get into his best friend's car. Both of them can now make off, but Arjun is stopped by Zoya who asks him to surrender. Convinced that he has not committed the crime, Zoya assures him they can fight the law. When the police arrive, Arjun raises his arms in a gesture of surrender. Zoya pleads with the inspector, who is a fair and just man, not to kill Arjun as he is ready to give himself up and, consequently, the inspector orders his men not to fire until told to, though none of them lower their weapons. Arjun is asked to drop his gun, which is in the pocket of his jeans. Zoya's ring, too, is in Arjun's pocket and when the gun is taken out and dropped, the ring is dropped along with it. Arjun, in a state of shock and blur, bends down to pick the ring, but the police mistakenly think he is reaching for the gun. They open fire, and Arjun is brutally killed. The film ends showing Zoya paying her shopping bill in a mall along with her child. At the payment counter she reduces items from her shopping list as she cannot afford to pay for all the items. Just then her son willingly gives away an item for himself from the shopping list, explaining it can be bought some other time. She smiles at him; realizing if Arjun wouldn't have been that greedy, he would've still been alive.