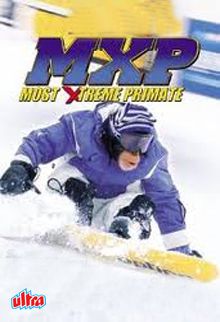 Take two brothers - left home alone, throw in a lost Chimp then add a couple of bad guys and youve got MXP: MOST XTREME PRIMATE - a non-stop action adventure that is about to turn the world of snowboarding upside down. After an exciting year playing hockey with the Seattle Simians and a brief stint learning how to skateboard, Jack the amazing chimp is about to go where no chimp has gone before - snowboarding down snowy mountain peaks, carving and shredding all the way. Life is pretty dull back at the ranch in El Simian. Jacks bored and longing for his next adventure. Julie, Jacks caretaker, and the other chimps have tried just about everything to cheer Jack up - but nothing is working. As a surprise, Julie decides to take Jack and the other chimps on holiday to Mexico. What seems like a good idea at the time turns into the worst case of mistaken identity ever -- and low and behold -- Jack ends up in BlackBrush, Colorado, once again on his own and looking for a friend. Jack meets Pete, a new kid in town, trying to fit in and the pair embark on the adventure together. Pete teaches Jack to snowboard and Jay, Petes wacky, rock-band-member, older brother, help them find their feet and gain confidence in the new town. While Julie and the gang desperately search for Jack - Pete and Jack shred the slopes and develop the friendship of a lifetime. Pete teaches Jack to become an awesome boarder and they eventually track down Jacks family, but not before Jack teaches Pete a few lessons of his own... Jacks celebrity status results in his attempted kidnapping and its all that Pete and Jay can do to get him back and return him to his rightful owner. Theres never a dull moment! Hang on dudes for the most exciting MVP yet!!!! Jack is simply every kids favorite pal and MXP: MOST XTREME PRIMATE is a high powered comedy adventure that will change the way you see chimps (...and snowboarding) forever.