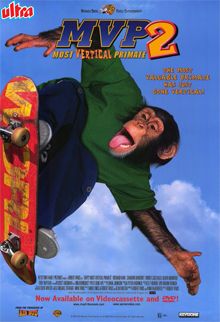 Jack, the most valuable primate, is back - and this time hes taking skating in a whole new direction. Everyones favorite hockey-playing chimpanzee from MVP: Most Valuable Primate returns to the ice after being drafted by the Seattle Simians into the ZHL hockey league. Jack amazes the Simians with his hockey skills and instantly proves himself to be an invaluable member of the team. But the Car Jackers, archrivals of the Simians, have plans of their own for Jack. Jealous of his success and popularity with the fans, the players plot to have him thrown out of the league. Confused, scared and with the authorities hot on his trail, Jack makes a run for it. Alone in the big city, he meets Ben, a homeless boy who loves skateboarding. The two loners discover that theyre kindred spirits and form an instant friendship. Under Bens patient tutelage, Jack learns how to skateboard and is performing like a pro in no time. When Ben learns of an amateur skateboarding competition with a grand prize of a corporate sponsorship, he dreams of entering and putting an end to his life on the streets. But qualifying for the competition isnt as easy as it seems. Meanwhile, the Simians are struggling through the playoffs without Jack, their star player. With the last game of the series quickly approaching, the team is desperate to find him in time to have a shot at the ZHL Cup. Can Jack help the team win the Cup and help Ben enter the skateboarding competition? The action - and the laughs - unfold as this big-hearted chimp gives it his all to come to the rescue of everyone whos depending on him. MVP2: Most Vertical Primate is a Keystone Family Pictures production of a Robert Vince film, distributed in Canada by Keystone Releasing (Canada) Inc. and Alliance Atlantis Vivafilm Inc.