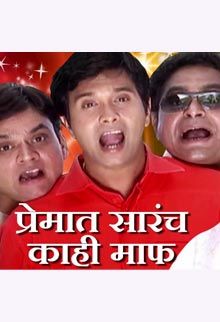 Dhanya, Manya, and Kanya are best of friends. Having finished their graduation, they are all set to join the work force and hence are looking for a job. Though all the three have different temperaments and liking, they all have the same understanding with respect to one thing? first get the girl then the job. The trio, have a mutual friend, philosopher and guide in Manu Aurangadadi. Mamu, Married four times, yet without an offspring regards this jolly bunch as his own children and showers his love and affection on these three boys. A family shifts in the house bang opposite Mamu?s laundry shop and the trio goes crazy when they happen to sight the young girl, Prema belonging to the family. The family Prema consists of her mother, sister and two aunts, all are widows expect Prema. Dhanya, Manya and Kanya having smitten by Prema try to woo her. A competition of one-up-man-ship starts among the three friends. The trio, asks Manu to help them in getting details of these women. Mamu is surprised to find that the women carry an extraordinary long names, he also learns that they have a condition that people address them with their long names only. Prema?s sister comes to know about the three boys eying her younger sibling, Prema. She does not discourage this in any way, but she want to find who among the three loves Prema the most. Thus she starts giving Prema tips and advise to act before the boys thus becoming the modulator of this lover affair. During the course of this, she also discovers that Mamu is the one modulating the boys. A game of a sort begin where the three boys get at logger heads and the best of them is destined to win