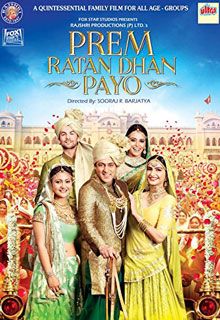 Yuvraj Vijay Singh (Salman Khan) a prince of Pritampur, is soon to be crowned as king and is engaged to Princess Maithili (Sonam Kapoor), but due to his stiff and stubborn nature Vijay faces many problems with Maithili as well as with his brother and sisters. His step sisters Rajkumari Chandrika (Swara Bhaskar) and Rajkumari Radhika (Aashika Bhatia) live in a separate house outside the royal palace, while his step brother Yuvraj Ajay Singh (Neil Nitin Mukesh) wants to kill him and take the crown with the aid of his manager Chirag Singh (Armaan Kohli), who is misguiding Ajay at every step. Yuvraj Vijay barely escapes a plan coordinated by Yuvraj Ajay and Chirag to kill him but gets badly injured. He's hidden in a secret chamber maintained by two doctors. Meanwhile, Vijay's lookalike Prem Dilwale (Salman Khan) a perky, lively and carefree stage actor who falls in love with Princess Maithili, reaches Pritampur to meet her along with his friend Kanhaiya (Deepak Dobriyal). At a bus stop, the Security Head of Pritampur Palace, Sanjay (Deepraj Rana) notices him by chance, and takes him to Diwan Sahib (Anupam Kher). Upon witnessing the striking resemblance between Prem and Yuvraj Vijay, diwan asks Prem to take Yuvraj Vijay's place while Yuvraj recovers from coma. Prem acts as Yuvraj Vijay but with his simple and caring nature, he impresses Maithili who earlier wanted to break up with Vijay. Prem also reconciles with his sisters and brings them back to the royal palace. When Yuvraj Ajay and Chirag gets to know the reality, they kidnap the real Yuvraj Vijay. Chirag decides to double cross Ajay, as he frees Vijay and provokes him against Ajay and Prem. Vijay and Ajay get involved in a sword fight when Prem and Kanhaiya intervene and clear the confusion. Chirag tries to shoot them down but falls to his death. Ajay regrets his deeds, while Vijay reconciles with his family. Maithili is shocked to know the truth about Prem and realizes that she loves Prem not Vijay, while Prem returns to his home. At the end, the royal family reaches Prem's house to reunite Prem and Maithili.