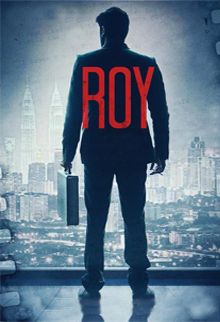 Kabir Grewal, a Casanovic film maker and screenwriter is making multiple films (GUNS Trilogy) based on a thief's life and robberies, all achieving high success. In order to shoot his third installment (GUNS 3), he goes to Malaysia, where he meets a London based film-maker Ayesha Aamir . Kabir and Ayesha get friendly and soon fall in love. When Ayesha gets to know about Kabir's casanova attitude, she breaks up with him and returns to London. Dejected Kabir goes into depression and returns back to Mumbai, leaving his film incomplete. After several failed trials Kabir couldn't find a perfect climax for his story. On his assistant Meera's suggestion Kabir goes to a film festival as part of the jury, where Ayesha's film is being screened. Ayesha, thought that Kabir is following her and asks him to stay away from her life. After his father's death and been sued by film financiers Kabir decides to move on and complete his film. In a parallel story, An infamous Roy is a mysterious international Art thief whom no country seems to be able to get their hands on, including detective Wadia. On his new assignment, Roy goes to an unknown foreign land to steal an expensive painting only to find that its owner is the beautiful Tia. Tia lives alone in a huge mansion where the painting is kept. Hence, Roy tries to befriend Tia in an art auction and soon impresses her with his charm. A chemistry sparks between the two and both start spending time together, giving Roy entry into the mansion. Seeking for the right opportunity, one night Roy runs away with the painting, leaving Tia heartbroken. Roy later regrets, as he has fallen in love with Tia and hence decides to return the painting to her. After a small clash with painting's new owner, Roy manages to get it back. On receiving the paintings Tia realises that Roy is now a changed man and forgives him. Meanwhile, Kabir's film "Guns 3" releases with huge success.