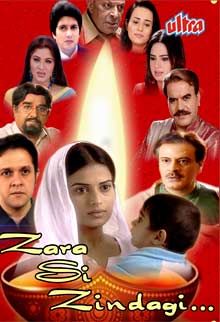 Ali Yawar Jung is a big business tycoon, who is not only respected and regarded by his near and dear ones, but also by people from all walks of life. He has established his base in Mumbai, while his son Harris is handling the Pune branch. Ali has chosen Rida, his friend Mushtaq Hussain's daughter as the one to marry Harris. Engagement preparations are on, but destiny has something else in store, Harris dies in a car accident while coming from Pune. The family is mourning the loss when they receive another jolt in the form of a lady and a child, who claim they are the widow and child of Harris. Everyone is shocked with disbelief. Harris's mother Nigar asks the lady Abeer to prove her claim. After great difficulty Abeer manages to prove her credentials legally and stays with them in the house. Everybody hates her especially Nigar and Mantasha (Harris's sister). A family drama packed with actions, reactions & emotions which showcase wonderfully the good as well as the exploitative side of the Muslim customs. It has heartfelt emotions and intense high level drama.