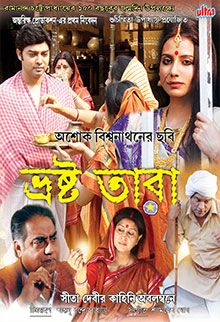 This film is based on Sita Devi?s novel of the same name. The text revolves around Amar, a diligent student who, during his college days, is engaged to be married to Surama, a beautiful village girl from a humble home. Amar is enraptured by her. Owing to the overpowering desire for dowry and the machinations of Amar?s father and uncle, the alliance is broken off just before the ceremony. Amar, distraught, loses interest in the institution of marriage and starts working as a school teacher in a North Calcutta ambience. He brings his family, now much poorer, to Calcutta.Many years later, he is shocked and shaken to see the ageing Surama, still attractive in middle age, in a Zamindari house;Surama is married to the septuagenarianParbatiCharan who is twice her age and a veritable cripple. Time waits neither for queens nor beggars and so while visiting a neighbouring marriage, Amar and his brother Probodh are mortified to see a repeat action of what happened in the case of Amar?s own village marriage that never happened. The dissatisfied groom?s party sweeps out of the marriage place leaving the girl to bear the brunt of ostracism from society. But Probodh, now of marriageable age, saves the day by offering himself as the groom. Like a magician with a wand, he transforms a place of grief to an abode of joy. But several hurdles present themself. Amar and Probodh?s mother needed to be convinced. The again, the climax occurs when Surama (Ranima), insists on seeing the new bride and mistaking her for the wife of Amar, bursts into a hysterical monologue blaming Amar for his unreasonable partiality towards this plain girl. Amar tries to tell her that it is not he who has married Hemangini, the new bride; it is his brother, Probodh. But somehow, Surama cannot be placated. Has she lost her mind? Amar is shattered to see her in this state?.Some days later, news comes of Surama?s demise.Amar walks with Surama in her funeral procession, retreating only from the grim jaws of death.