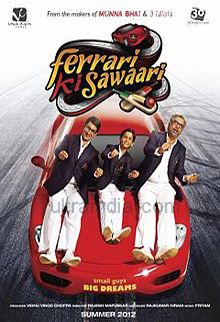 A little boy, Kayo (Ritvik Sahore) thinks of nothing but playing cricket. His father, Rusy (Sharman Joshi), thinks of nothing but his little boy. To fulfill his son's dream of playing at the Lord's Cricket Ground, the honest and upright Rusy performs his first small act of dishonesty: he borrows a gleaming red Ferrari, for one hour. The only problem is he doesn't inform its legendary owner. A wild, breathless, bumpy ride begins, a ride that leads to a menagerie of amazing characters: a wedding planner who'll stop at nothing, a Laurel-and-Hardyesque pair of loyal attendants, a greedy politician and his reckless son and a mechanic who specializes in stolen cars. As the Ferrari zooms through this chaotic world of street-thugs and mass-weddings, another saga unfolds – a grumpy old man and his secret wounds, and an epic rivalry that goes back thirty-eight years. A naive Rusy must dodge bullets and bouncers for one unforgettable night, and play the role of a perfect father. Ferrari Ki Sawaari is a story of small guys and their big dreams, and how one night changes their lives forever.